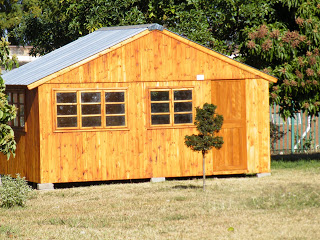 One of our main goals was realized today. Jenna Praschma, Sector Manager for TVEP's Access to Justice and Trauma Services, brought us to see the ZoZo Project or the Wendy House as it is sometimes called. Through the generosity of the Paul Newman Foundation, we were able to construct a small building that will serve as a combined waiting room/counseling center for young children and teenagers who have been physically and/or sexually abused and are awaiting their court appearance. The 'Wendy House' guarantees that these child-victims will have a safe area in which to wait rather than in a crowded common area with the perpetrator and his family/friends.

We were gratified to see this little wooden structure fully constructed awaiting electricity. Our next project will be to fence in a small yard ensuring the safety of the children. We've also asked Jenna to provide us with estimates for the necessary furniture and toys needed to complete this worthwhile project. 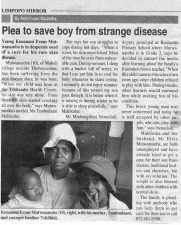 HFL Donors Build a House for a Homeless Family 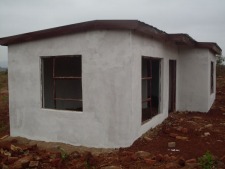 Freda and childrens' home under construction

Freda, infected with HIV by her abusive husband, applied to Thohoyandou Victim Empowerment Program (TVEP) for assistance after he forced her and her seven children out of the family home. The following is a brief summary of her ordeal:

Freda tried to escape her violent husband several times but was unable to find protection or refuge. Finally she managed to flee with her children and go into hiding. Her husband eventually tracked her down and forcefully dragged her back where he physically beat and repeatedly raped her. While cleaning the house she found medical records confirming him as HIV+. Subsequently tests confirmed Freda was HIV+ as well. At this point his violence escalated to also include the children.

TVEP tried to advocate on her behalf many times. Because her husband had friends occupying senior positions in government departments, her protection order was rescinded. Alone, frightened and aware that the justice department, SAPS, and the local police department were unwilling to assist her, she turned once again to TVEP. Recognizing Freda s dire circumstances and her negligible alternatives, Mesikhwa, a TVEP victim advocate, decided capital needed to be raised immediately for a new home for Freda and her children.

TVEP submitted a proposal to Hope for Limpopo and without delay we were able to fund materials and building of the dwelling began.

The house keys have been officially turned over to Freda! TVEP graciously invited us to the ceremony and though we were unable to attend, we heard that HFL donors were given considerable credit and praise for the role they played in this life changing event.

TVEP Volunteers build house for homeless women and her children

For every victim of rape or domestic violence reported, a volunteer is assigned to monitor the progress of police investigations and court proceedings and assist women and/or children in receiving ongoing support and counseling. Volunteers staff trauma centers, visit caregivers of children on anti-retroviral medication and vulnerable and orphaned children.

They work to educate everyone in their community on their rights and responsibilities regarding sexual assault, domestic violence, child abuse and HIV and social grants conducting campaigns and workshops in eight outlying villages.

In the past 12 months TVEP volunteers assisted 445 survivors of rape (20% of these were children), 1285 survivors of domestic violence (2% were children), and 40 individuals impacted by HIV/AIDS. TVEP workshops and campaigns empowered 110,893 people on their rights and responsibilities pertaining to matters of gender and child violence, and reached another 950,000 through national and local radio.

None of the above could have been achieved without the commitment of these volunteers who dedicate their time, energy and skills for their community.

HFL appreciates and thanks these committed individuals, honoring their hard work through out the year, by supporting the Volunteer Appreciation Ceremony.

Thohoyandou Victim Empowerment Program received an invitation to participate in a 3-day WHO/UNIFA (World Health Organization/ United Nations Population Fund/ collaborating with family Health International) conference at the UN Headquarters in Bangkok. Thailand. This was an invitation only workshop focusing on universal access to female condoms. The issue is quite significant considering an estimated 650 South African women die each day from preventable AIDS. The meeting was a vital human rights step for all South African women and for the recognition of TVEP on an international level. Through donor support HFL was able to send a knowledgeable TVEP staff person who provided crucial input on this topic and its relevance to TVEP's work in Limpopo Province.